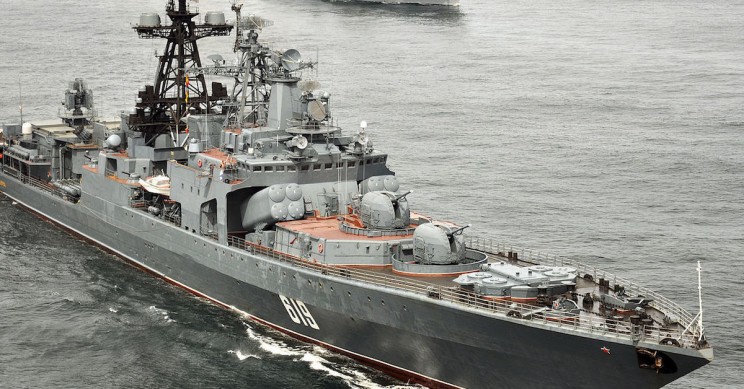 Russian Navy boats are now equipped with a weapon that reportedly makes its victims hallucinate. News of the weapon was reported in state-run media outlet RIA Novosti. The trippy war tool apparently uses oscillating beams of powerful light that makes its targets disoriented and confused.

In a weapons test described by the state media, volunteers were asked to shoot at targets being defended by the new weapon but failed to hit anything due to their dizziness and instability. Twenty percent of the volunteer group reported feeling nauseous while others said they saw spots of light floating in their eyes.

The existence of installation of the weapon is yet to be confirmed outside of state media organizations, but as one commenter already observed simply wearing sunglasses might be the best way to avoid the weapons damage.

The weapon is suspected to have been developed by Roselectronics, a state-owned company that is responsible for 80% of the electronics production in Russia. Using light as a weapon isn’t a new idea, small powerful torches have been used by security services for decades as a low-impact method of submitting targets.

If you’ve ever had a torch accidentally shone in your eyes you will understand how temporarily painful and confusing it can be. All these weapons work by flooding the human nervous system with more light than it can usually process.

The overstimulation causes a temporarily block and in extreme cases, the body can react with nauseous or hallucinations.

Light based weapons that cause permanent blindness are prohibited by the Protocol on Blinding Laser Weapons.

Russian and US relations regarding weapon development are at a moment of acrimony, as both parties pull out of the Intermediate-range Nuclear Forces (INF)Treaty, a Cold War-era nuclear arms pact, that prohibited the development of a particular class of nuclear missiles.

Debilitating the senses is a common tool in making crowds and individuals submissive and incapacitated. Sound has been used extensively as a non-lethal weapon.

Powerful sound waves can disrupt or destroy a human’s eardrum making them feel disoriented and nauseous. Less powerful sounds waves can cause a high enough level of discomfort to render people vulnerable and submissive.

During the 2012 London Olympics, a high powerful sonic tool was deployed that had the potential to be used as both a public service announcement tool and weapon.

The American-made Long Range Acoustic Device (LRAD) was bought by the London Olympics that could be deployed to send either verbal warning over long distances or to emit a beam of pain-inducing tones for use in crowd control.