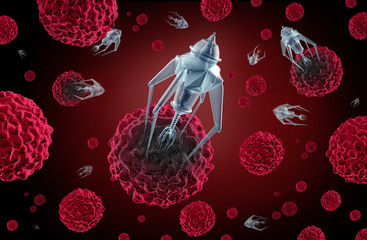 Yes, you read it right! It may sound impossible or even a very distant reality, but it’s already happening!

That’s the theme we brought you today. Killing bots! Not the bad apocalyptical kind of bots. The good ones, tiny little ones, also known as nanobots. Specifically, the ones that are bringing us hope as a method to treat cancer.

If you want to understand a little bit more about this incredible technology, you should start with the primary concepts.

Well, when we talk in the medical context, nanobots are usually self-propelled devices built with biodegradable materials and bio-nano components. According to their purpose, the bots can vary in size, ranging between 100 nm and 10 micrometers. That is almost as small as a virus capsule.

Theoretically, they can be made of carbon atoms mimicking a diamond structure with a smooth surface and use natural body energetic supplies as ATP for propulsion and power.

How are nanobots designed?

The main rules when developing the design of nanobots are how they are going to move and get attached to their target. If we want a device to navigate our blood it has to be unharmful to our healthy cells and be able to swim until the end of its trajectory. The movement is usually supported by flagella that performs a helical-like rotation driving the nanobot forward.

How are they supposed to kill cancer?

Nanobots can be built and programmed to carry substances and even identify pathogenic RNA strands present in cells. That means it can travel through your body until it finds the right target and, only then, delivers a certain drug capable of killing not only malignant tumors but also harmful bacterias. And that’s only one example of their capacities. The truth is, there are several actions they can perform to reach a goal.

Specialists from Arizona State University successfully developed nanobots capable of cutting off the blood supply of cancer cells. The autonomous nanobots were constructed with DNA origami and were about 90 nanometers long. They can identify a protein highly present in tumor cells called nucleolin. Then, they are supposed to release a blood coagulation protease thrombin, leading to the decrease of the tumor in size and even to its destruction.

Researchers from ITMO University proposed another concept. The nanobots were also built with DNA sheets. But these ones were capable of identifying a particular sick RNA strand and blocking its replication. That is, the tumor becomes unable to grow.

Which are some engineering challenges to overcome?

Building nanobots is incredibly hard. The smallest the structure we desire to attain, the more complex it’s to achieve. Also, finding a proper energy supply to power the bots can be quite a task. We can think about using nanocircuits with resonant electric characteristics, but, even so, they could be slightly too big for the purpose.

Are nanobots a good tool for us?

Yes. The nanorobots have an immense potential for active and precise tumor targeting, which is quite hard to do with only chemotherapy.

But they can’t be all good, can they?

Well, there are some disadvantages worth mentioning. They are very costly and complicated to design. Electrical nanorobots are still vulnerable to electrical interference, like radio and electric fields from daily devices. Also, the nanobots can destroy the human body on a molecular level. In the wrong hands, it can become a terrible mass destruction weapon and terrorism tactics.