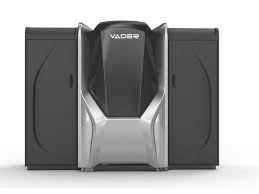 With each new edition of the RAPID + TCT show, 3D printing further solidifies itself as an industrial technology that is increasingly capable of end part production and integration into the factory floor.

This year was no different. Though there were no earth-shattering stories, the event did see new releases and announcements from solid players in the space. Here, we run down the list for those who missed the show:

GE Additive has utilized its investment in Arcam wisely, unveiling the Arcam EBM Spectra H, a high heat 3D printer meant to print with metals prone to cracking. The system can print parts at temperatures exceeding 1000°C, making it ideal for materials like titanium aluminide and Alloy 718, which it will be able to print with at launch, and nickel super alloys, which it will support beginning in 2019.

Other features include an auto-calibrated 6kW, a build volume of Ø250x430mm, a dust-tight environment, good insulation, automated powder distribution and recovery, and a speed increase of 50 percent compared to Arcam Qplus systems.

Xact Metal has upgraded its original (comparatively) low-cost metal 3D printer, the XM200, by releasing two new systems. Priced at $130,000, the XM200S has a build volume of 127x127x127mm, relies on 200W Yb fiber laser, and uses a digital galvanometer mirror scanner with a jogging speed of 12m per second. The $80,000XM200C 3D printer also has a build volume of 127x127x127mm, but uses a 100W Yb fiber laser, as well as a scanner that fuses at speeds up to 500mm per second, according to the company. The XM200C uses Xact Metal’s specialty mirror system, discussed in more detail in this article.

By partnering with Yaskawa America, Titan Robotics was able to amp up its large-scale, pellet-fed 3D printer, Atlas. Using Yaskawa’s motion-control technology, Atlas is now able to print up to 350mm of material per second, with the print head moving between two points at one meter per second.

In conjunction with RAPID + TCT, Formlabs announced that it had raised $30 million in Series C funding led by Tyche Partners, with participation from Shenzhen Capital Group, UpNorth Investment Limited, DFJ, Pitango and Foundry Group. The funds will be used to add products to the company’s portfolio and scale operations, with a focus on China and Asia. Formlabs also will be expanding its headquarters to include a new 18,000-square-foot facility.

Global contract manufacturer Jabil has been toying with using 3D printing for production for some time. At RAPID + TCT, the company unveiled the fruits of its labor, the Jabil Additive Manufacturing Network. Jabil aims to execute a vision of distributed manufacturing, in which parts can be 3D printed closer to their end destination. The current technology of choice is HP’s Multi Jet Fusion, but the company may expand to include other systems as it proves their capabilities for production.

Aleph Objects announced the release of an upgrade to its already powerful, but petite, LulzBot Mini 3D printer. The LulzBot Mini 2 includes Einsy RAMBo electronics with Trinamic drivers for quieter 3D printing; belt-driven Z-axis for faster, more accurate printing; an Aerostruder Tool Head; a modular bed system with a reversible heated glass/PEI surface; and a graphical LCD controller. The Mini 2 also has a print volume 20 percent larger than its predecessor, without an increase in machine footprint.