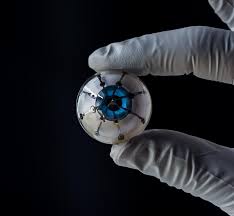 n 2015, market research firm Gartner projected that medical 3D printing would become the pioneering field that would drive additive manufacturing (AM) into the mainstream in two to five years. Four years have passed, so we’ve decided to examine the industry to determine if Gartner’s predictions have come true.

In this article, we’ll explore a handful of medical 3D printing stories from the past year to gain perspective on the level of adoption at which the technology stands.

With porosity at 80 percent, according to the company, these 3D-printed parts are some of the most porous spinal implants available. A proprietary mesh lattice design enables the implants to reduce stiffness while increasing bone cell growth, one of the key drivers of adoption of 3D printing in the creation of implants and radiological visibility.

The first Aries-L lateral interbody parts were implanted into a patient for the first time in January 2019. It is important to note that the implants were patient-specific, one of the most important promises of 3D-printed medical devices geared at improving treatment outcomes.

“Through 3D printing, we are able to manufacture spinal implants that are customized to the patient,” said Dr. Sam Joseph, Jr., who was involved in the procedure and aided in the development of the Aries series. “Meaning the size of their disc, the size of their vertebra, how high the vertebra may be, as well as the curvature they may have in their back we are trying to create. With this cutting-edge technology, we can offer our patients implants such as the Aries L Interbody Fusion Device that can be created at a certain height and a certain length, as well as a certain angle, which offers our patients better, customized care, which results in better outcomes for the patients.”

While 3D-printed spinal, craniomaxillofacial and knee implants are increasing in number, 3D-printed orthopedic devices may be the most prevalent, led in part by GE Additive subsidiary Arcam. So far, over 100,000 hip cups have been produced since 2007 using Arcam’s electron beam melting (EBM) technology. LimaCorporate, an Italian orthopedics company and Arcam customer, has been a pioneer in the space. It performed the world’s first 3D-printed hip implant, made using EBM.

LimaCorporate recently partnered with New York City’s Hospital for Special Surgery to establish the first AM facility for custom implants in a hospital environment. Whereas implants are typically 3D printed offsite with specialists like LimaCorporate, the new facility will make it possible to produce the devices closer to the point of care, reducing wait times and shipping. Expected to open in 2020, the new site will be operated by the Italian firm and serve hospitals across the U.S. with custom implants while also developing new medical products.

The holy grail of bioprinting is the ability to 3D print patient-specific transplant organs, thus eliminating the need for waiting lists and donors and, more importantly, the fear of organ rejection. We are still likely years away (five to 10 years, according to Gartner in 2017) from achieving that reality, but the base technology is still advancing.

For instance, it is now becoming commonplace to 3D print layers of simple tissues. Multiple companies having developed products associated with research applications. This includes Poietis, which has created a laser-based method for 3D printing biological matter, such as skin cells. The company has established several partnerships related to 3D printing liver tissue for pharmaceutical testing and cartilage. In early 2018, Poietis became the first to release a commercial 3D-printed skin product, which led to partnering with BASF and L’Oreal.

Another leader in the space is CELLINK, which has quickly expanded since it was founded several years ago. The company now features six bioprinters on the market, four based on extrusion technologies, and 30 to 35 bioinks. Initially, the majority of customers have been pharmaceutical researchers looking to test drugs on human tissue.

Already this year, we’ve seen the introduction of the first consumer product relying on bioprinting. At CES, Johnson & Johnson (which is deeply immersed in the medical 3D-printing space) showcased the Neutrogena MaskiD, a 3D-printed facemask produced based on 3D images of a customer’s face. Using a selfie taken with a smartphone 3D camera, the Neutrogena Skin 360 system determines the placement of necessary ingredients for dermatological treatment based on a person’s face. A custom-fit hydrogel mask is 3D printed from cellulose made using locust beans and red seaweed, along with Neutrogena skincare ingredients, and delivered to the customer.

There is still much work to be done to perfect the bioprinting of vascular structures necessary to bring blood and nutrients to bioprinted tissues, thus opening up the possibility of fabricating patient-specific organs for transplant.

Though medical interventions are likely the first applications that come to mind when it comes to 3D printing in medicine, the technology is also thought to aid in the evolution of medical tools. A German medical company, Endocon, has developed a 3D-printed device for extracting hip cups more easily, reliably and quickly.

The endoCupcut features blades printed using GE Additive’s Mlab cusing 100R system. The blades are able to slice along the edge of the acetabular cup so that surgeons can loosen and remove hip cups before implanting a new hip cup. Surgeons can choose from 15 sizes of blades, depending on the patient. The use of 3D printing has sped up production time, reduced rejection rate from 30 percent with cast blades to 3 percent with 3D-printed stainless steel and dropped cost per blade by 40 to 45 percent.

In the U.S., Johnson & Johnson has taken 3D printed surgical tools a step further by introducing personalization. With patient-specific surgical guides, doctors no longer have to arrive at the operating room with a series of different tool sizes. Instead, they can use a patient’s CT scan to produce anatomy-specific tools, reducing operation time and improving effectiveness.

In addition to bioprinted organs, new medical technology is being researched worldwide. Some of the more unique developments include a team of researchers at the University of Toronto that has created a portable skin printing device capable of printing bioink into a wound in order to aid in the healing process. The ink is usually made up of protein-based materials, such as collagen and fibrin. Printing takes only two minutes and requires little operator training. Future research includes addressing larger wounds and performing in vivo studies.

Also exciting is work currently being performed by the University of Minnesota. Already known for 3D printing a “bionic ear,” the team, led by Michael McAlpine, has created an artificial eye with 3D printing. The creation is made up of a hemispherical glass dome on which silver particles were printed, followed by photodiodes.

The process took just an hour and resulted in a bionic eye capable of translating light into electrical signals at 25 percent efficiency. Next, the team aims to improve the quality of the light receptors and use a soft, implantable material as the substrate.

Less in the science fiction realm is the production of patient-specific medical models for surgery preparation, as well as education purposes. One of the least complex applications of the technology, 3D-printed models are becoming increasingly used to help surgeons navigate a patient’s anatomy before embarking on a complex procedure.

While the technology itself is not futuristic, the widespread adoption of 3D-printed medical models is. 3D printing leaders like Stratasys, Materialise and 3D Systems are all involved in increasing accessibility to the technology. At the same time, more hospitals are adopting 3D printing for model creation. For instance, the Veterans Affairs Puget Sound Health Care System has partnered with GE Healthcare to 3D print patient-specific medical models at various VA locations across the United States. Even as adoption increases, studies are underway to demonstrate the efficacy of the technology for presurgical preparation.

As it stands, medical 3D printing seems to be tracking more or less along Gartner’s curve. Hearing aids have long been the paragon of 3D printing for mass manufacturing and, now, it seems that other applications are not far behind.