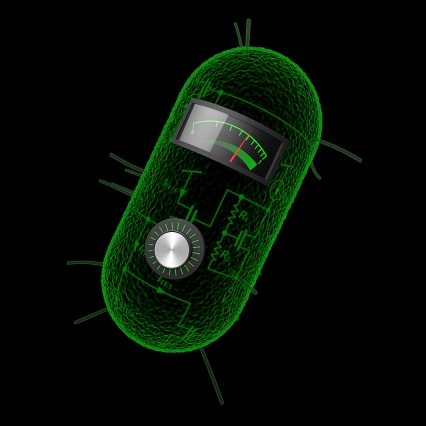 The circuits perform those calculations in an analog fashion by exploiting natural biochemical functions that are already present in the cell rather than by reinventing them with digital logic, thus making them more efficient than the digital circuits pursued by most synthetic biologists, according to Rahul Sarpeshkar and Timothy Lu, the two senior authors on the paper, describing the circuits in the May 15 online edition of Nature.

“In analog you compute on a continuous set of numbers, which means it’s not just black and white, it’s gray as well,” says Sarpeshkar, an associate professor of electrical engineering and computer science and the head of the Analog Circuits and Biological Systems group at MIT

Analog computation would be particularly useful for designing cellular sensors for pathogens or other molecules, the researchers say. Analog sensing could also be combined with digital circuits to create cells that can take a specific action triggered by a threshold concentration of certain molecules.

“You could do a lot of upfront sensing with the analog circuits because they’re very rich and a relatively small amount of parts can give you a lot of complexity, and have that output go into a circuit that makes a decision — is this true or not?” says Lu, an assistant professor of electrical engineering and computer science and biological engineering.

Lead author of the Nature paper is MIT postdoc Ramiz DanielJacob Rubens, a graduate student in microbiology, is also an author of the paper.

Sarpeshkar has previously identified thermodynamic similarities between analog transistor circuits and the chemical circuits that take place inside cells. In 2011, he took advantage of those similarities to model biological interactions between DNA and proteins in an electronic circuit, using only eight transistors.

In the new Nature paper, Sarpeshkar, Lu and colleagues have done the reverse — mapping analog electronic circuits onto cells. Sarpeshkar has long advocated analog computing as a more efficient alternative to digital computation at the moderate precision of computation seen in biology. These analog circuits are efficient because they can take in a continuous range of inputs, and they exploit the natural continuous computing functions that are already present in cells. In the case of cells, that continuous input might be the amount of glucose present. In transistors, it’s a range of continuous input currents or voltages.

Digital circuits, meanwhile, represent every value as zero or one, ignoring the range of possibilities in between. This can be useful for creating circuits that perform logic functions such as AND, NOT and OR inside cells, which many synthetic biologists have done. These circuits can reveal whether or not a threshold level of a certain molecule is present, but not the exact amount of it.

Digital circuits also require many more parts, which can drain the energy of the cell hosting them. “If you build too many parts to make some function, the cell is not going to have the energy to keep making those proteins,” Sarpeshkar says.