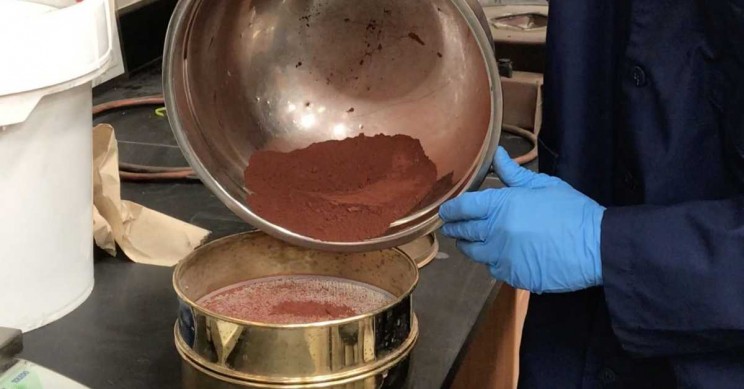 The Kennedy Space Center has already placed an order for half a ton of the soil simulant created by UCF’s team of astrophysicists. Will you be next?

Five months ago space agencies NASA and ESA were set to source Martian soil for research through a mission that required travel to the Red Planet. Now, it seems the precious dirt may actually be available right here on Earth.

$20 a kilogram plus shipping

The University of Central Florida (UCF) has announced it is selling Martian dirt for $20 a kilogram plus shipping. And in case you think this might be a joke, rest assured it is not!

Indeed, a team of UCF astrophysicists has conceived of a standardized method for creating Martian and asteroid soil known as simulants. “The simulant is useful for research as we look to go to Mars,” said in a UCF statement Physics Professor Dan Britt, a member of UCF’s Planetary Sciences Group.

“If we are going to go, we’ll need food, water and other essentials. As we are developing solutions, we need a way to test how these ideas will fare,” further explained Britt.

Although the extraterrestrial soil is sure to appeal to space enthusiasts everywhere, its purpose is more for testing potential future techniques to be used by explorers who may reach the planet some day. “You wouldn’t want to discover that your method didn’t work when we are actually there,” Britt said.

“What would you do then? It takes years to get there,” added Britt.

Based on Mars Curiosity rover signatures

This new UCF dirt is as close to the real Martian deal as one can get. The formula is actually based on the chemical signature of the Mars’ soils collected by the Curiosity rover.

The new substance will also now provide a standardized scientifically-founded base for researchers to accurately compare experiments. To encourage such precise work, the formula is published online for all to access and use.

The formula is also compatible with the different types of soil that can be found on Mars. “With this technique, we can produce many variations,” said Kevin Cannon, the paper’s lead author, and a post-doctoral researcher who works with Britt at UCF.

“Most of the minerals we need are found on Earth although some are very difficult to obtain,” added Cannon. As such, UCF features asteroid and moon simulants, which are rarer and harder to find, on the list of items that can be ordered.

The team can mimic most ingredients and, better yet, can effectively substitute for any potentially harmful materials ensuring all their simulants meet NASA’s stringent safety standards. There are currently 30 pending orders for the Martian soil including a significant half a ton purchase from none other than the Kennedy Space Center.

But for Britt and Canon, the formula is most interesting for the capacity it has to help accelerate the current desire to explore, analyze and perhaps colonize our vast and crowded solar system. “I expect we will see significant learning happening from access to this material,” Britt concluded.

The findings are published in the journal Icarus.