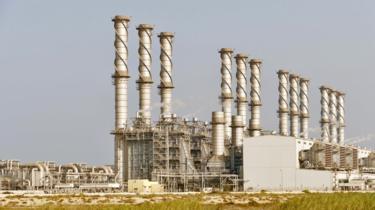 Desalination plants around the world are pumping out far more salt laden brine than previously believed, according to a new study.

The salty effluent is a by-product of efforts to extract fresh water from the sea.

Researchers found that plants are now producing 50% more of this chemical laden cocktail than expected.

The brine raises the level of salinity and poses a major risk to ocean life and marine ecosystems.

More than half the brine comes from four middle eastern countries.

These are Saudi Arabia, the United Arab Emirates, Kuwait and Qatar, with Saudi Arabia alone responsible for 22% of the effluent.

There’s been a major expansion of desalination plants around the world over the past few years, with almost 16,000 now operating in 177 countries.

It’s estimated that these plants produce 95 million cubic metres of freshwater per day from seas and rivers – equivalent to almost half the average flow over Niagara Falls.

A number of small countries, such as the Maldives, Malta and the Bahamas, meet all their water needs through the desalination process.

But the success of the technology is coming at a price. This new study estimates these plants discharge 142 million cubic metres of extremely salty brine every day, a 50% increase on previous estimates.

That’s enough in a year to cover the state of Florida under 30.5cm (12 inches) of brine.

The problem with all this hyper salty water is that it often contains other contaminants and can pose a significant threat to marine life.

“The salt level in the sea water is further increased because of this disposal of the concentrate brine,” said Dr Mahood Qadir from the UN University Institute for Water, Environment and Health, one of the study’s authors.

“There is an increase in the temperature of this zone of the sea, together they decrease the dissolved oxygen level, which is called hypoxia and that impacts the aquatic life in that zone.”

Hypoxia often leads to what are called dead zones in the oceans – Scientists say these zones have quadrupled since 1950, mainly as a result of climate change. Now the salt is adding to these problems.

“High salinity and reduced dissolved oxygen levels can have profound impacts on benthic organisms, which can translate into ecological effects observable throughout the food chain,” said lead author Edward Jones, at Wageningen University, in the Netherlands.

Researchers involved in the study say the problem often originates in the age of the desalination plant. The older, reverse osmosis based technology often produced two litres of brine for every litre of drinking water.

Efforts are now being made to minimise the impact of the brine. Scientists believe a large number of metals and salts in the effluent including uranium, strontium as well as sodium and magnesium have the potential to be mined.

“Reject brine has been used for aquaculture, with increases in fish biomass of 300% achieved. It has also been successfully used to cultivate the dietary supplement Spirulina, and to irrigate forage shrubs and crops (although this latter use can cause progressive land salinisation).”

Compounding the problem is the ongoing expansion of desalination as more and more countries turn to the technology is the face of climate change which is exacerbating water shortages.

“There is an urgent need to make desalination technologies more affordable and extend them to low-income and lower-middle income countries. At the same time, though, we have to address potentially severe downsides of desalination – the harm of brine and chemical pollution to the marine environment and human health,” said Dr Vladimir Smakhtin, a co-author of the paper from the UN University.

“The good news is that efforts have been made in recent years and, with continuing technology refinement and improving economic affordability, we see a positive and promising outlook.”

The study has been published in the journal Science of the Total Environment.