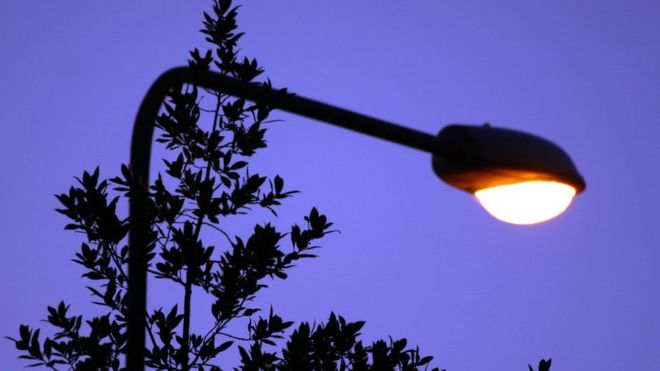 As more than two-thirds of us will be living in cities by 2050, scientists and tech firms are looking at new ways to harness renewable energy within the built environment. But at what cost?

One day, your office windows will be harvesting energy from the sun, while the lamp-post down in the street is storing energy in its concrete.

Vertical wind turbines will spin as traffic whooshes past, and pavements and roads will generate small amounts of energy from all those commuter feet and heavy buses and lorries pounding down them.

Fleets of driverless taxis will give back surplus energy to the grid, and cities generally will make much more efficient use of the energy they consume.

That, at least, is the vision of many technologists, environmentalists and city planners.

But how realistic is it?

New materials certainly show promise. Cement mixtures made from power station waste could turn buildings in to batteries, for example.

These potassium-geopolymetric (KGP) composites are cheaper than ordinary cement and can store electricity. A six-metre tall lamp-post made from KGP and equipped with a small solar panel could hold enough energy to power itself throughout the evening, researchers say.

“We have shown that KGP cement mixtures can be used to store and deliver electrical energy without the need for expensive or hazardous additives,” says Lancaster University professor Mohamed Saafi, who is heading up the research.

Large numbers of buildings made with KGP could be used to store and release excess energy – smoothing demands on urban electricity grids.

Solar is the most common renewable energy source in cities as costs have continued to tumble – from about £3 a watt a decade ago to 40p a watt now.

In the UK more than one in three firms is already producing some of their own electricity, mostly using roof-based solar panels.

But making silicon-based solar panels is very energy intensive, requiring temperatures of 1,400C and above. The silicon needs to be 99.9999% pure.

But panels made from a class of materials called perovskites can be made much thinner, more cheaply and much lower temperatures, says Nitin Padture, professor of engineering at Brown University in the US.

And as they are partially transparent they could also be used for windows.

The drawback is that most of them contain lead, a toxic metal. But one option Prof Padture and his team are now studying is replacing the lead with titanium.

“Titanium is quite common but no one had thought of using it to replace lead in perovskite solar panels,” he says.

“We’re not looking to replace existing silicon technology just yet, but instead we’re looking to boost it.”

When it comes to wind – the other most common renewable energy source – conventional turbines don’t work well in built-up areas because wind directions vary greatly.

So researchers Nicolas Orellana and Yaseen Noorani have come up a spherical wind turbine to address this problem of varying winds. Their O-Wind turbine, which has now won the UK’s 2018 James Dyson Award, is a spherical device that spins when wind hits it from any direction.

Another solution from Turkish firm Devici Tech is to use vertical wind turbines along roads where they can be powered by the slipstream from passing traffic.

It says its Enlil turbines, currently being tested in Istanbul, can handle the power needs of two homes. The turbines can also incorporate solar panels and earthquake sensors, the company says.

But not all urban energy-harvesting projects seem to make commercial sense.

In France, for example, engineering firm Colas has been pioneering photovoltaic roads at sites across the country, as well as in the US and Japan.

Also there’s a question over how good at energy producing they are. The solar panels are flat on the ground rather than angled towards the sun, and can be blocked by heavy traffic, as well as snow, mud or water.

But for that money the city could have simply bought 65 million kWh of electricity on the open market.

Another technology struggling to justify itself commercially is piezo-electricity.

If you squeeze certain materials such as quartz, you can make electricity flow through them. So cars and lorries trundling along special road surfaces equipped with piezo-electric devices could generate energy. Pedestrians could do this on specially-made pavements.

In 2009, Israeli firm Innowattech experimented with energy-capturing roads, and now a US firm, Pyro-E is to demonstrate similar technology on a short stretch of road in Fresno, California.

Yet while it is technically feasible, it is currently prohibitively expensive.

Some calculate that in the US, a kilometre of a two-way street would need 13,000 piezoelectric devices, adding $400,000 (£307,000) to construction costs. Even without considering the manufacturing or installation costs, it would take about 12 years to earn back this amount.

UK firm, Pavegen, has developed electricity-generating pavements that can produce two to four joules of energy with each step you take.

Its pavements, which cost about £2,350 per sq m, have now been installed in more than 200 locations worldwide, such as transport hubs and shopping centres, the company says.

That might sound expensive, but then so were solar panels when they first came onto the market.

“We believe it’s people not technology alone that will transform our cities for the better,” says Laurence Kemball-Cook, Pavegen’s founder and chief executive.

“Crucially, we reward people for their interactions via apps. So by taking a healthier Pavegen-enabled route through a retail environment or street, you help make your city more sustainable and get rewarded for doing so.”