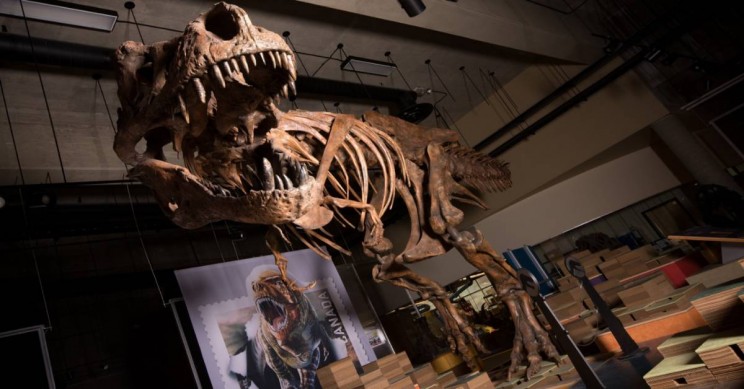 In a extraordinary fossil discovery, scientists see evidence of what happened immediately after the Chicxulub Impactor struck the Earth and ended the rein of the Dinosaurs.

In a stunning discovery, paleontologists have discovered fossils that testify to the incredible devastation in the hours and days after the Earth was struck by the impactor that created the Chicxulub crater off the Yucatan peninsula in Mexico, suspected of causing the mass extinction event 66 million years ago that brought an end to the dinosaurs.

The End of the Cretaceous Captured in Still Life

A team of paleontologists from the University of Kansas (KU) have found fossils in North Dakota that provide a snapshot of the moments immediately following the most cataclysmic impact event that life on Earth has ever had to suffer; the impact event that produced the Chicxulub crater around 66 million years ago that is suspected of bringing the reign of the dinosaurs to a sudden, violent end.

At a site known as Tanis, in the Hell Creek Formation in North Dakota, the KU team unearthed the fossils of animals and fish caught unaware and off-guard by the impact event and who were then immediately and “exquisitely” preserved in a deposit of sediment left behind by the subsequent worldwide flooding that began minutes after the impact event.

“The sedimentation happened so quickly everything is preserved in three dimensions — they’re not crushed,” said David Burnham, preparator of vertebrate paleontology at KU’s Biodiversity Institute. “It’s like an avalanche that collapses almost like a liquid, then sets like concrete. They were killed pretty suddenly because of the violence of that water. We have one fish that hit a tree and was broken in half.”

Since their fossils were first discovered in the 19th century, dinosaurs have been the subject of endless fascination by scientists and the general public alike. The imagination reels at these megafauna’s scale, diversity, and especially their sudden and complete disappearance from the fossil record at the end of the cretaceous era, about 66 million years ago.

For over a century, the extinction of animals like the Tyranosaurus rex remained one of the great mysteries of science until, in 1980, Nobel Prize winning scientist Luis Alvarez, his son, Walter Alvarez, geologist at UC Berkeley, and chemists Frank Asaro and Helen Vaughn Michel announced [PDF] the discovery of a concentrated layer of iridium in the geological record right at the boundary between the Cretaceous period and the Paleogene period, often called the KT boundary.

Almost 100 times the concentration that we would expect to find on Earth—iridium is a very rare element on Earth—, and found at sites around the globe, the iridium layer Alverez’s team found could only be explained by one thing. A massive impactor, either an asteroid or a comet, striking the Earth 66 million years ago and packed with enough iridium to spread it in a thick layer all over the world.

Such an impactor would had to have been anywhere from 6.5 to 50.25 miles in diameteraccording to a recent study, and something that large would have caused such wisespread devastation that entire species of animals, including dinosaurs, would have been driven extinct almost overnight. It is believed that the Chicxulub Impactor released 100 million megatons of energy, or just a bit more than 7 billion Hiroshima bombs. The only thing missing from Alvarez’s hypothesis, as it came to be called, was a crater from the impact, and so it remained controversial; even after the discovery of the Chicxulub Crater off the Yucatan peninsula in 1994.

Now, with these new findings from the KU team providing as close to photographic evidence as we’ll find in the geological record, we can now see the Alvarez hypothesis play itself as it was happening.

“We’ve understood that bad things happened right after the impact, but nobody’s found this kind of smoking-gun evidence,” said Burnham. “People have said, ‘We get that this blast killed the dinosaurs, but why don’t we have dead bodies everywhere?’ Well, now we have bodies. They’re not dinosaurs, but I think those will eventually be found, too.”

According to the KU team, the fossils at the Tanis site were all jammed into a “rapidly emplaced high-energy onshore surge deposit” coinciding with the KT boundary.

“A tangled mass of freshwater fish, terrestrial vertebrates, trees, branches, logs, marine ammonites and other marine creatures was all packed into this layer by the inland-directed surge,” said Robert DePalma, a KU doctoral student in geology working in the KU Biodiversity Institute and Natural History Museum and lead author of the forthcoming paper.

Impact Ejecta and an Ancient Seaway

This material, known as impact ejecta, is one of the most important markers of an impact event in the geological record, as impact ejecta are often characterized by high pressure and shock metamorphesis that cannot be produced by other natural processes on Earth.

Besides the ejecta, the shocks that would ripple out from the impact would circle the globe, generating violent tsunamis in waterways half a world away. The Tanis site and the sediment deposit at the KT boundary was a product of one of these tsunamis.

“A tsunami would have taken at least 17 or more hours to reach the site from [Chicxulub crater], but seismic waves—and a subsequent surge—would have reached it in tens of minutes,” said DePalma. Sitting beside the carved out bed of an ancient seaway, these seismic waves would have generated tsunamis up that waterway and into the Tanis site before the ejecta from the impact would have finished falling from the sky over North America.

A species of fish found at the site had time to inhale this ejecta that had reached the river valley minutes before the tsunami that would encase it in soil struck.

“The fish were buried quickly, but not so quickly they didn’t have time to breathe the ejecta that was raining down to the river,” said Burnham. “These fish weren’t bottom feeders, they breathed these in while swimming in the water column. We’re finding little pieces of ejecta in the gill rakers of these fish, the bony supports for the gills. We don’t know if some were killed by breathing this ejecta, too.”

DePalma believes that this site, with hundreds of preserved specimens of a wide variety of species—some of which are entirely new to science—fills in a major gap in the record of the Chicxulub Impactor and its aftermath.

“It’s difficult not to get choked up and passionate about this topic,” he said. “We look at moment-by-moment records of one of the most notable impact events in Earth’s history. No other site has a record quite like that. And this particular event is tied directly to all of us—to every mammal on Earth, in fact. Because this is essentially where we inherited the planet. Nothing was the same after that impact. It became a planet of mammals rather than a planet of dinosaurs.

“As human beings, we descended from a lineage that literally survived in the ashes of what was once the glorious kingdom of the dinosaurs. And we’re the only species on the planet that has ever been capable of learning from such an event to the benefit of ourselves and every other organism in our world.”