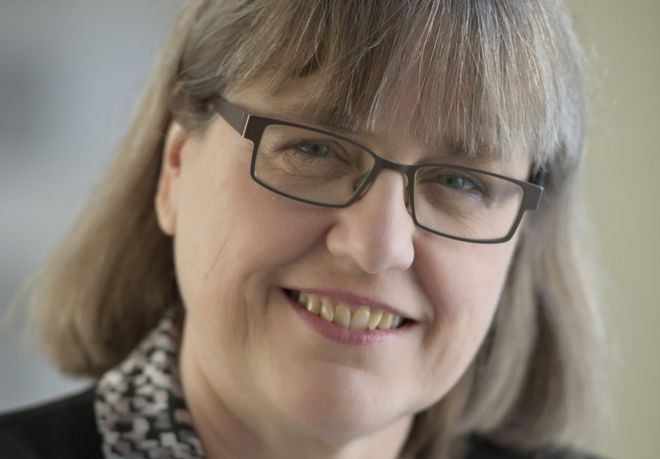 The Nobel Prize in Physics has been awarded to a woman for the first time in 55 years.Donna Strickland, from Canada, is only the third woman winner of the award, along with Marie Curie, who won in 1903, and Maria Goeppert-Mayer, who was awarded the prize in 1963.

Dr Strickland shares this year’s prize with Arthur Ashkin, from the US, and Gerard Mourou, from France.

It recognises their discoveries in the field of laser physics.

Drs Mourou and Strickland paved the way for the shortest and most intense laser pulses ever created. They developed a technique called Chirped Pulse Amplification (CPA). It has found uses in laser therapy targeting cancer and in the millions of corrective laser eye surgeries which are performed each year.

Speaking to the BBC, Dr Strickland said it was “surprising” it had been such a long time since a woman had won the award.

However, she stressed that she had “always been treated as an equal”, and that “two men also won it with me, and they deserve this prize as much if not more than me”.

The award comes a few days after a physicist gave a “highly offensive” lecture at the Cern particle physics laboratory in Geneva in which he said that physics had been “built by men” and that male scientists were being discriminated against.

He has since been suspended by the research centre.

The last woman to win the physics prize, German-born American physicist Maria Goeppert-Mayer, took the award for her discoveries about the nuclei of atoms.

Polish-born physicist Marie Curie shared the 1903 award with her husband Pierre Curie and Antoine Henri Becquerel for their research into radioactivity.

Reacting to her win, Dr Strickland, who is based at the University of Waterloo in Canada, said: “First of all you have to think it’s crazy, so that was my first thought. And you do always wonder if it’s real.

“As far as sharing it with Gerard, of course he was my supervisor and mentor and he has taken CPA to great heights so he definitely deserves this award. And I’m so happy Art Ashkin also won.”

She added: “I think that he made so many discoveries early on that other people have done great things with that it’s fantastic that he is finally recognised.”

In a statement, the American Institute of Physics (AIP) offered its congratulations to all the winners, adding: “The countless applications made possible by their work, like laser eye surgery, high-power pettawat lasers, and the ability to trap and study individual viruses and bacteria, only promise to increase going forward.

“It is also a personal delight to see Dr Strickland break the 55-year hiatus since a woman has been awarded the Nobel Prize in Physics, making this year’s award all the more historic.”

What is the work that has won a Nobel?

Before Dr Strickland and Dr Mourou’s pioneering work, the peak power of laser pulses was limited because, when cranked up to high intensities, they would destroy the material used for amplifying its energy.

To get round this, the researchers first stretched the laser pulses in time to reduce their peak power, then amplified them and finally compressed them.

When a laser pulse is compressed in time and becomes shorter, more light is packed into a small space. This dramatically increases the intensity of the pulse.

Arthur Ashkin realised an old dream in science fiction – using the radiation pressure of light to move physical objects. In doing so, he invented the optical tweezers that are today used to grab particles, atoms, viruses and living cells with their laser-based pincers.

He first worked on getting laser light to push small particles towards the centre of the beam and hold them there.

Then, in 1987, he used the tweezers to capture living bacteria without harming them. The technique is now used widely to study the machinery of life.

Previous winners of the Nobel Prize in Physics

2017 – Rainer Weiss, Kip Thorne and Barry Barish earned the award for the detection of gravitational waves.

2016 – David Thouless, Duncan Haldane and Michael Kosterlitz shared the award for their work on rare phases of matter.

2015 – Takaaki Kajita and Arthur McDonald were awarded the prize the discovery that neutrinos switch between different “flavours”.

2013 – Francois Englert and Peter Higgs shared the spoils for formulating the theory of the Higgs boson particle.

2012 – Serge Haroche and David J Wineland were awarded the prize for their work with light and matter.