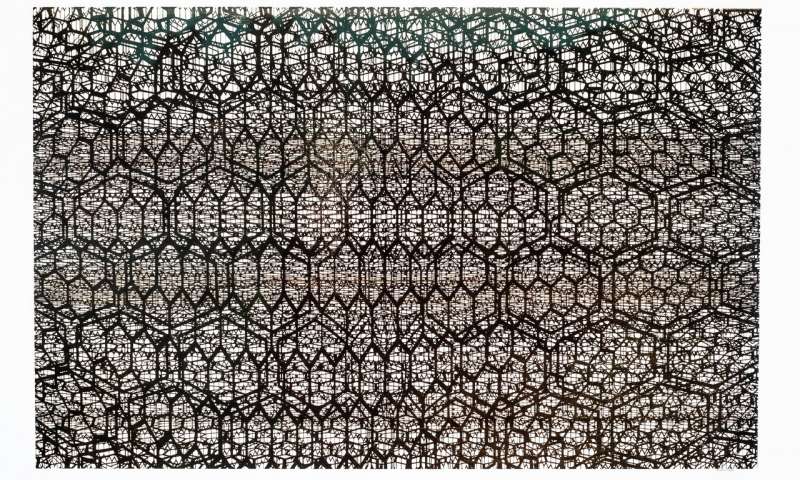 When you read about electrifying art, “electrifying” isn’t usually a verb. But an artist working with a Rice University lab is in fact making artwork that can deliver a jolt.

The Rice lab of chemist James Tour introduced laser-induced graphene (LIG) to the world in 2014, and now the researchers are making art with the technique, which involves converting carbon in a common polymer or other material into microscopic flakes of graphene.

LIG is metallic and conducts electricity. The interconnected flakes are effectively a wire that could empower electronic artworks.

The paper in the American Chemical Society journal ACS Applied Nano Materials – simply titled “Graphene Art” – lays out how the lab and Houston artist and co-author Joseph Cohen generated LIG portraits and prints, including a graphene-inspired landscape called “Where Do I Stand?”

While the work isn’t electrified, Cohen said it lays the groundwork for future possibilities.

“That’s what I would like to do,” he said. “Not make it kitsch or play off the novelty, but to have it have some true functionality that allows greater awareness about the material and opens up the experience.”

Cohen created the design in an illustration program and sent it directly to the industrial engraving laser Tour’s lab uses to create LIG on a variety of materials. The laser burned the artist’s fine lines into the substrate, in this case archive-quality paper treated with fire retardant.

The piece, which was part of Cohen’s exhibit at Rice’s BioScience Research Collaborative last year, peers into the depths of what a viewer shrunken to nanoscale might see when facing a field of LIG, with overlapping hexagons – the basic lattice of atom-thick graphene – disappearing into the distance.

Cohen said his art is about media specificity.

“In terms of the artistic application, you’re not looking at a representation of something, as traditionally we would in the history of art,” he said. “Each piece is 100% original. That’s the key.”