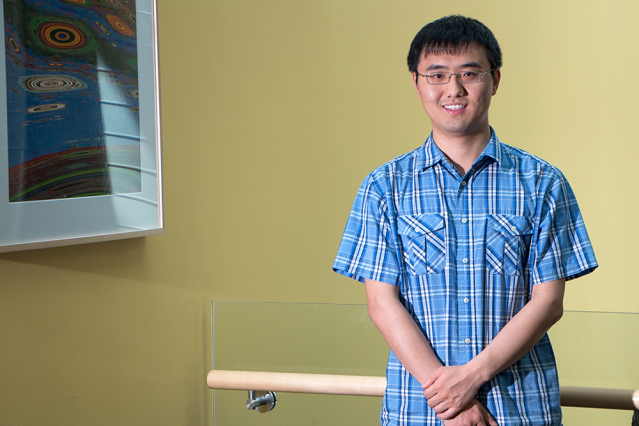 Measurements showed the energy gap, or bandgap, of this ultra-thin (2-D) film to be about eight times higher than the bandgap in bulk (3-D) tin-tellurium, with an on/off ratio as high as 3,000, they report July 15 in the journal Science. Their findings hold promise for making random access memory (RAM) devices from this special semiconductor material, which is known as a topological crystalline insulator.

“This discovery is very exciting because usually when you decrease the thickness from the 3-D to 2-D, the phase transition temperature always decreases and therefore could destroy the ferroelectricity. But in this case, the [ferroelectric] phase transition temperature increased. It’s quite unusual,” explains MIT postdoc Junwei Liu, a first author of the paper. “As far as we know, this might be the first time to observe this very unusual property.” MIT assistant professor of physics Liang Fu is one of the paper’s senior authors.

These results follow three years of work based on a prediction by Fu, former student Timothy Hsieh PhD ’15, postdoc Liu (who was then a graduate student at Tsinghua University), and collaborators, that ferroelectric structural distortion in tin-tellurium and similar topological crystalline insulators, would open a tunable bandgap on the surface. Hsieh is now a postdoc at University of California at Santa Barbara. Researchers in the U.S. and Europe, including Vidya Madhavan and Ilija Zeljkovic at Boston College, confirmed this prediction experimentally in bulk materials. “The importance of ferroelectricity in topological crystalline insulators led us to study thin films of tin telluride,” Fu says.

Tin-tellurium, which is also known as tin telluride, is classified as a IV-VI semiconductor, because tin (Sn) is from Group IV on the periodic table and tellurium(Te) from Group VI-A. At extremely cold temperatures, below about -283 degrees Fahrenheit, bulk tin-tellurium is a ferroelectric material, which means it becomes polarized with positive and negative electric charges splitting into opposing alignments, but it is not practical for room temperature applications.

Liu, whose work involves theoretical calculations, says in 2013 MIT researchers partnered with experimentalists at Tsinghua University in China to explore ferroelectricity in thin films of the tin-tellurium material. Kai Chang of Tsinghua University in China conducted experiments and is a first author of the Science paper. The paper’s co-authors also include a dozen colleagues at Tsinghua and Renmin Universities and other research facilities in China, and RIKEN Center for Emergent Matter Science in Japan.

A unit cell is the smallest repeating pattern of atoms in the tin-tellurium molecular structure. Built on a base of graphene and silicon carbide, the tin-tellurium layers in the experiments ranged in size from 1 to 8 unit cells. In an actual device, the tin-tellurium would be capped with insulating material, as seen in the illustration in the slideshow above. The new study shows this ferroelectric state persists up to only about 26 F in the single-unit cell thin film tin-tellurium material, but in 2-, 3- and 4-unit cells, the ferroelectric state was robust to 300 kelvins, or 80 F, the highest temperature the experimental apparatus could measure.

“Room-temperature devices could have a very large commercial application. That’s why we are very excited about this work; it’s really robust even in room temperature,” Liu says.

Tests showed that memory could be written through a top gate voltage, which “flips” the in-plane polarization of the ferroelectric film, and read by a voltage tunneling through an edge without erasing the memory state. Evidence of this behavior in a sample that was a mere 16-nanometers in width means that tin-tellurium memory cells could be densely packed. Nanosensors and electronics are also possible.