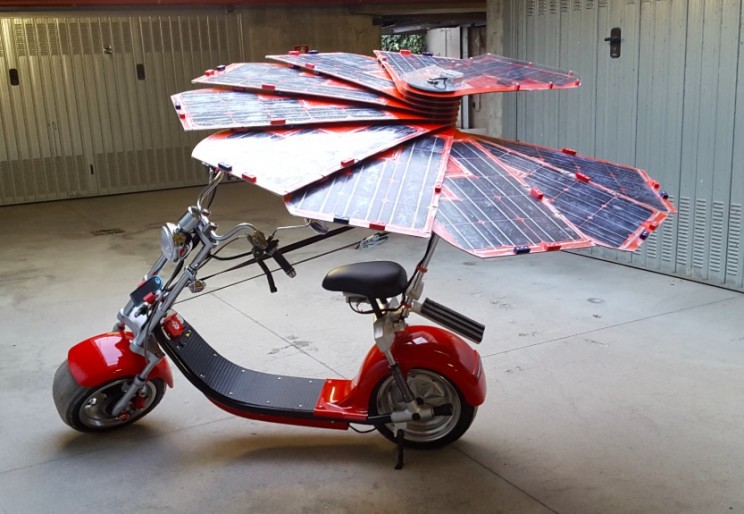 Interesting Engineering has a first look at a new original solar battery charger for electric vehicles at the Maker Faire Rome 2018.

According to the High-level findings of the Electric Vehicle Outlook 2018 report, sales of electric vehicles (EVs) are expected to be increasing from a record 1.1 million worldwide in 2017, to 11 million in 2025 and then surging to 30 million in 2030 as they become cheaper to make than internal combustion engine (ICE) cars.

China is expected to lead this transition, with sales accounting for almost 50 percent of the global EV market in 2025.

“We built the solar charger thinking about sunflowers. As the flower, it is made of petals and is able to follow the sun to maximize its yield. It uses an algorithm that combines azimuth and zenith,” Ilenia Zambelli told Interesting Engineering at the Maker Faire in Rome.

To maximize the use of the solar power the algorithm calculates the solar azimuth.In most of the solar photovoltaic (PV) energy calculator tools, an azimuth value of zero is facing the equator in both northern and southern hemispheres.

According to Ilenia Zambelli, the solar charger for electric vehicles can be customized for different kinds of batteries and be used to power electric bikes, motorcycles, even cars, and boats.

Placing the city of Rome at the center of the debate on innovation, the Maker Faire Rome is organized by InnovaCamera, a Special Agency of the Rome Chamber of Commerce.

Maker Faire Rome is the European Edition of Maker Faire which showcases invention, creativity, and resourcefulness. It’s a celebration of the Maker Movement.

Currently, electric vehicles can travel for 60-100 km before recharge. “With this charger, you will be free to charge your vehicle everywhere and using free energy,” Ilenia Zambelli said.

“The particularity is that the vehicle can recharge both in motion and when it’s stationary thanks to the particular algorithm that uses Azimuth and Zenith and follows the sun,” Ilenia Zambelli told the Italian press.

The future is solar

The team has recently filed a patent for their invention and is currently looking for partners, sponsors, manufacturers, or enterprises interested in supporting their project to start a collaboration and mass production.