The first time a vehicle landed on Mars was in 1997. Last year, the NASA Perseverance rover was sent to Mars on a mission to look for signs of past microbial life and to better understand the conditions of the planet, geology and climate, preparing for a future human mission. The robot was launched on July 30, 2020 and landed on Mars on February 18, 2021. During the landing, the rover has already sent images of the landing place.

In the coming years, the robot will collect samples of rock and soil that will be sent to Earth for analysis. Another objective of Perseverance is to find traces of water and resources for the development of life.

The difficulty in exploring Mars is due to atmospheric and gravity differences, in addition to the enormous distance, which varies from 55 million to 400 million kilometers depending on the position of each planet in their orbits around the sun. In addition, the long distance causes the information to take a long time to be sent and received, leading the communication cycle to take about 22 minutes. For this reason, almost the entire process of landing on the planet was controlled by artificial intelligence.

To assist in the exploration of the planet, the Perseverance rover has a series of high-tech equipment coupled. It has, for example, an arm of more than 2 meters that carries instruments such as cameras, an earth-piercing radar and a machine that will convert the carbon dioxide of Mars into oxygen. 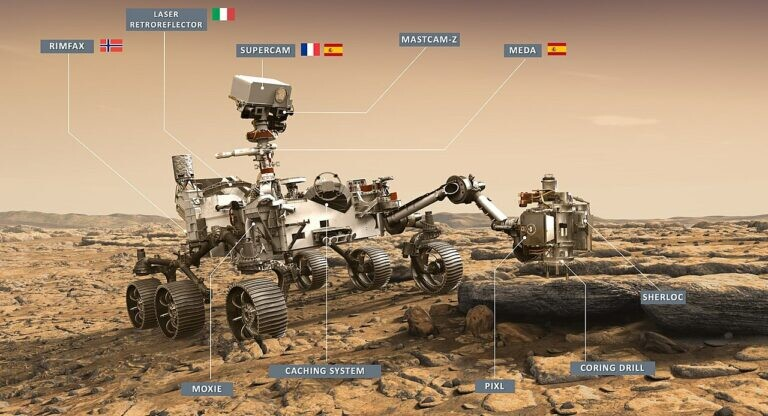 One of the devices, the MEDA (Mars Environmental Dynamics Analyzer) will work as a meteorological station, monitoring the Martian atmosphere. It is equipped with seven sensors and a camera that should be able to operate in extreme temperatures up to 90 ° C. These devices will allow the measurement of wind speed and direction, soil and air temperature, relative humidity, atmospheric pressure, solar radiation incident in the ultraviolet, infrared and visible ranges and the properties of suspended dust, while the camera will be able to take pictures in high resolution of sky and clouds.

The PIXL is an X-ray fluorescence spectrometer that will determine the composition of the surface. RIMFAX is a georadar that will explore the subsoil. MOXIE will aim to try to convert Mars’ carbon dioxide into oxygen. With MASTCAM-Z, panoramic images and close-ups will be obtained and SHERLOC will analyze surface samples to detect possible organic compounds.

In addition to all the technological equipment, Perseverance rover also has several curious information. In SHERLOC, a hidden coin has the address of the famous detective engraved. In honor of health professionals who fight against covid-19, it also has a plaque with the symbol of medicine.

It also has three microchips that bear the names of almost 11 million people from the “Send your name to Mars” campaign, a tradition initiated by NASA with the Curiosity robot. You can also leave your name on the website to be sent on a future mission! The plate with the chips has a laser engraved design representing the Earth and Mars united by sunlight, in addition to the phrase “Explore As One” written in Morse code.

The parachute used during the landing also hid an enigma, which was soon deciphered by Internet users and confirmed by the chief engineer of the Perseverance mission on social networks. 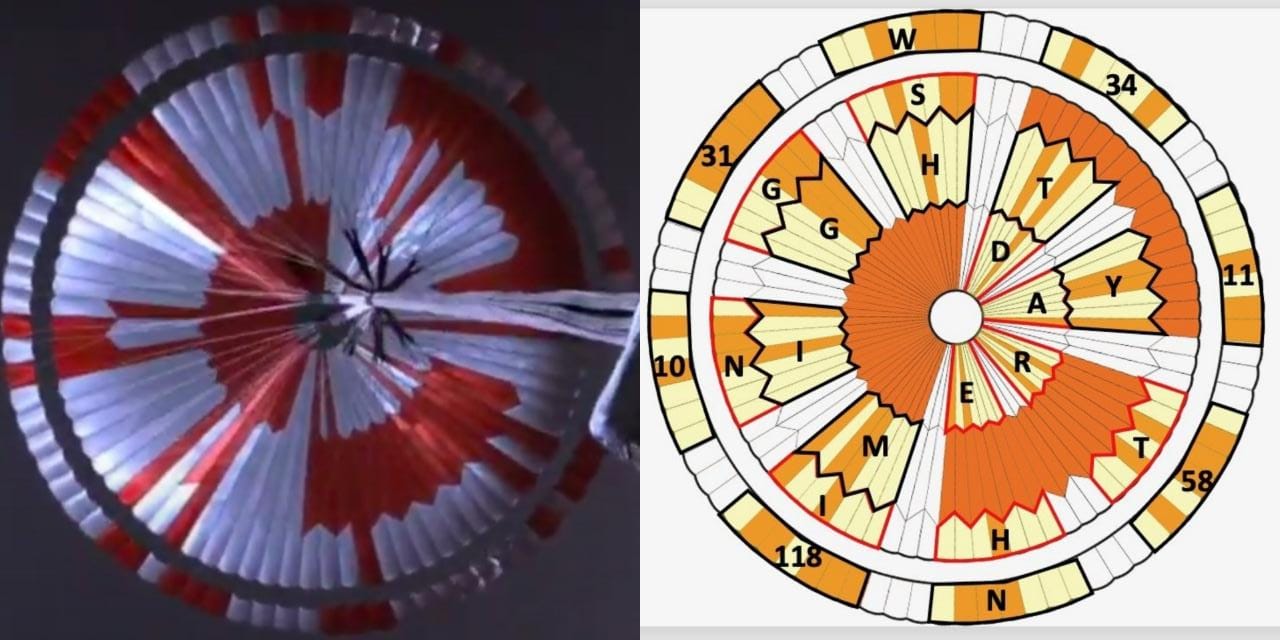 The message hidden in the parachute in binary code was “dare mighty things” and the coordinates of NASA’s Jet Propulsion Laboratory (JPL), in California, where the rover was built: 34°11’58” N 118°10’31” W.

Another easter egg is a “family photo” of the rovers that have been sent to Mars by NASA: Sojourner, Spirit, Opportunity, Curiosity and Perseverance, with the Ingenuity helicopter at its side.

Finally, Mastcam-Z, which has cameras to take color photos of Mars in high definition, carries images of the first life forms on Earth and their evolution, as well as humans and a rocket. The message “TWO WORLDS, ONE BEGINNING” is inscribed on the base plate. The following message is also included, written in English, Mandarin, Hindi, Spanish and Arabic: “Are we alone? We came here to look for signs of life, and to collect samples of Mars for study on Earth. To those who follow, we wish a safe journey and the joy of discovery”.

As much as it looks like a sci-fi movie, the missions on Mars are a reality and are evolving more and more! At this rate, it won’t be long before we have human missions on Mars! Will we soon have a colonization on the red planet? Leave your opinion in the comments!